During the ’50s two brothers, Fioravante and Carlo Berto, decided to move with their family from Veneto to the region of Brianza where they started working as upholsterers. Even if they were young, they had the opportunity to work in the biggest upholstery companies and laboratories of this area. They were really excited about this experience and got slowly a good reputation among the upholstery people.

It is about during 1974 when they decided to work by themselves and open their own laboratory. Even if the work was tough, they had such great expectations and good will that they could afford any challenge: they worked hard and manufactured their production on behalf of great furniture companies and by that time there was not a clean separation between private and working life.
Some private customers started visiting their laboratory and spread the news about their production which slowly increased together with the number of people employed in the company.

By the end of ‘90s Fioravante’s son, Filippo, got into the family business: he was really impressed by the real value created by his father’s work and by the advantages he could take from the Brianza area. Besides the production of custom made sofas, Filippo introduced BertO story: the main characters were upholsterers and carpenters who could explain the production step by step. A new way of working was about to come.

Thanks to the new technologies and to the web in particular we had the feeling that our “story” could be a part of something else and allow us to be connected to the rest of the world.

The BertO society has got bigger: nowadays we have a direct distribution all over the world, we sell online and we have opened two important showrooms, one in Meda and the other one in Rom. Our international fame is at the highest level. 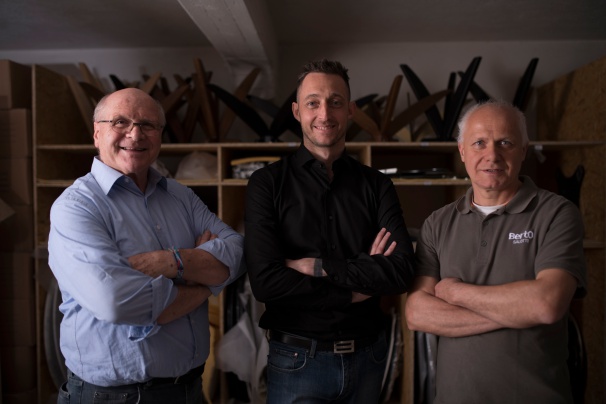 We are at your disposal to offer you exclusive services as for projects, interior design and custom made furniture.
Ask our consultants and designers for advices, visit our BertO Fine Upholstery Tailoring Atelier and work with our upholsterers together in our design studio. You can do it online or directly in our showrooms.