Created in Pesaro in 1962 as an artisan firm specialising in the production of bar and gelato parlour furniture, IFI has made its mark on the history of food & beverage outlet furnishings through innovations that have dictated new reference standards for the sector, all over the world.

The late 1990s marked an important turning point for IFI, which has deployed its experience in refrigeration, well-known and emerging designers alongside a cutting-edge R&D department with more than 30 experts, to assert itself with its own style in the world of Artisan Gelato, giving birth to IFI Gelato Village: this decision has led the brand in just a few years to stand out for its wide product range and, once again, its innovative scope.

IFI Gelato Village covers a range of products that today can be considered with good reason to be unique in the world, aimed at the most demanding artisan gelato-makers. As well as offering an extensive list of traditional display cases, IFI has invented the first ventilated pozzetto, offering significant improvements to the cost/benefit ratio for those choosing the traditional way, and revolutionised the market with Tonda (designed by Makio Hasuike & Co., in collaboration with IFI R&D), the first round and rotating gelato display case in the world.

In 2011, IFI invented the first hermetic closure system for traditional display cases (HCS), and invented the anti-rotation system for tubs. In 2014, IFI won the Oscar of design, the Compasso d’Oro, thanks to Bellevue with Panorama technology (design Marc Sadler + IFI R&D) a brand new synthesis of two pillars of artisan gelato parlours that have always been the opposite of each other: perfect gelato storage in pozzetto counters and visibility of flavours in display cases.

Built by men who have lived the post‒war period and the great industrialization of the 1960s thanks to their hard work, today the company operates at global level while still maintaining the values it was built on. Like a tree blossoming and stretching its branches while still keeping its roots firmly planted in the earth from which it grew, so IFI has always been intensely aware of the beauty and significance of belonging to these places made up of people, crafts, culture, passions and landscapes between the sea and the hills. A heritage that IFI have always felt it their responsibility to safeguard and valorize with gratitude and affection. 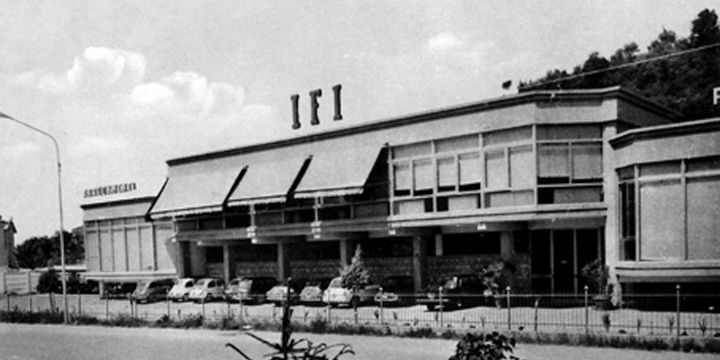