THE PAST
Porro was founded in Brianza, the traditional birthplace of Italian quality furniture. In the heart of this area, in the small town of Montesolaro of Carimate, the brothers Giulio and Stefano Porro, established in 1925 their first workshop dedicated to the production of old-style pieces of furniture, original re-elaborations of the English and French furniture of the past centuries, produced for the newborn Milanese bourgeoisie.
The transition to second generation of Porro family, with the cousins Carlo, Arturo and Silvio, marked the turn to Modern style in the 50's, also thanks to the long and successful collaboration with the architect Giulio Moscatelli, who in 1955 designed the new workshop next to the family house.
In the 60's the transformation in a real industry needed a new productive pole, opened in 1968.
The participation to the Salone del Mobile di Milano just founded, was fundamental for Porro to start building its fame as a high quality firm and the creation of a first network of agents spread all around the peninsula. The sale challenges were always supported by a constant work of stylistic research, strengthened by the cooperation with some of the most important Italian designers of the period, such as Bruno Munari, commissioned for the creation of the company's logo in 1966.
The need to be different from the competitors and to face the market with innovative products, brought Porro to start the cooperation with A&D architectural firm, managed by the architect Luigi Massoni and with Piergiorgio Cazzaniga, helping the company to define its new DNA in the turn to a new type of production, the modular furniture, still representing Porro core business.

THE PRESENT
In the mid 80's, with the entrance of the third generation, Lorenzo, Fabio, Giovanni and Danilo Porro, design assumed a leading role in the company: the professional liaison with Piero Lissoni, Porro Art Director since 1989, started in that period.
The attendance to the Furniture Exhibition of Köln, the cooperation with the German designers Wolfgang Tolk and Werner Aisslinger and the entrance in the German market, were the first steps of a coherent project of internationalization, which strengthened in the 90's, with the creation of an international network of sale agents and the participation to exhibitions on the 5 continents.
Among the targets of the new millennium, the enlargement of the manufacturing pole in 2000 with the building of a new warehouse of 14 thousand square meters, the opening in 2004 of the first mono-brand shop in via Durini 15, Milan, new projects signed by International designers such as Jean Marie Massaud, Christophe Pillet, Soda Des/gners, GamFratesi and the Swedish group, Front.
Today Porro S.p.A. counts on the cooperation of more than 100 employees and over 600 retailers across the globe, with exports account for 60% of turnover.

Innovating by tradition
Since 1925 the Porro family manages a company supporting a unique furnishing philosophy, matching handicraft tradition of the time with the most modern advanced manufacturing and information technologies.
The furnishing culture as family wealth, together with the diktats, production is based on, that is formal cleanness, shape and function geometry, are the buttonholes allowing Porro to consistently get a more and more consistent international market share without forgetting or betraying its origins.
The brand at present too stands out for its product quality and customer service. Two basic features which still depend on the consistent connection to the local territory supporting Porro foundation and growth, to the skill and expertise of its employees and finally to an extremely flexible production and manufacturing activity organisation, consistently and rapidly complying with any standard or customised request.

Clear and simple design
Among the most looked-for furnishing brands on the market, Porro stands out for its essential and immediately identified language, with simple signs, geometries, shapes, without forgetting in case of highly complex production processing too, its unique company philosophy: simplicity above all.
All Porro products are the result of a subtraction, from a progressive simplification process. Systems which are complex too, are the result of a very simple aesthetic vision, based on consistency, simplification, simplicity, without forgetting quality, the best possible quality at all.

Research and development
Porro brand dates back to 1925 but it always managed to anticipate trends in time, thanks to its constant research on materials, shapes and processing techniques.
The study of technological details, the selection of woods and colours and why not trials on materials generally are developed by Centro di Ricerca e Sviluppo Porro, the required link between designers and production, taking care of the project more technical requirements.
If systems are entirely manufactured within the company, as for the collection units, Centro di Ricerca e Sviluppo selects the most qualified companies on the surrounding territories, able and expert enough to rely on for the most complex techniques, such as inlay, metal folding, solid wood processing or thermal and plastic material processing.
The development of exclusive and unique technologies, some even patented, provide for a higher consistency and deeper value to each Porro furnishing unit. 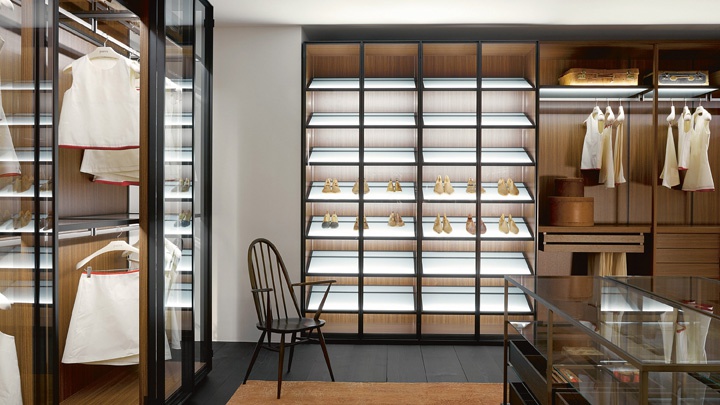